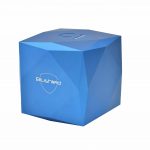 The best in Portable device in Blushield Portable EMF protection, the U1 includes the enhanced feature that the Premium Cube and Premium Ultra contain. The new Aqua coloured case is precision CNC machined out of aircraft-grade alloy, creating the most durable and wear-resistant portable we have ever produced. The U1 Portable lasts much longer in between charges than the other portable models.

Please note: this model does not have an on/off switch

The best in Blushield Portable EMF protection, a quantum leap breaking through what we previously thought. What makes Blushield 80% effective has been enhanced in this just released Portable, which is also incorporated in the Ultimate C1 Cube, the Ultimate B1 Cube, and the Ultimate U2 Ultra. With the original Blushield version still within the technology, the U1 Portable also produces added constant protection for today’s EMF environment when away from your home and workplace models. The Ultimate U1 Portable has a 10 metre radius in all directions creating a 20 metre coherent sphere.   Not as strong as the home plug in type models, portables are a companion product to maintain being in the coherent field.  The new Aqua coloured case is precision CNC machined out of aircraft-grade alloy, creating the most durable and wear-resistant portable we have ever produced. The U1 Portable lasts much longer in between charges than the other portable models.