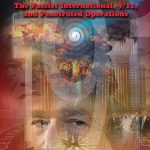 The Reality of Underwater UFOs by Ivan T. Sanderson, with foreword by David Hatcher Childress (paperback)

This book is a groundbreaking contribution to the study of the UFO enigma, originally published over 30 years ago. In this book, Sanderson, a renowned zoologist with a keen interest in the paranormal, puts forward the curious theory that “OINTS”, (other intelligences) live under the Earth’s oceans. This underwater, parallel, civilisation may be twice as old as Homo sapiens, he proposes, and may have “developed what we call space flight”.

Sanderson postulates that the OINTS are behind many UFO sightings as well as the mysterious disappearances of aircraft and ships in the Bermuda Triangle. What better place to have an impenetrable base than deep within the oceans of the planet? Yet, if UFOs, or at least some of them, are coming from beneath our oceans or lakes, does it necessarily mean that there is another civilisation besides our own that is responsible?

In fact, could it be that since WWII a number of underwater UFO bases have been constructed by the very human governments of our planet? Whatever their source, Sanderson offers here an exhaustive study of USOs (Unidentified Submarine Objects) observed in nearly every part of the world. He presents many well-documented and exciting case studies of these unusual sightings and more.