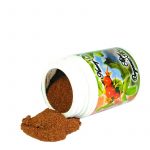 Nascent Iodine helps to increase energy levels, nourish the thyroid gland and regulate the bodys metabolism. It is a necessary nutrient for overall health and a crucial component of the detoxification process.

Nascent Iodine is a consumable iodine in its atomic form rather than its molecular form. It is an iodine atom that has an incomplete number of electrons. It is paramagnetic. What does that mean? Well, it means that the iodine atoms can hold an electromagnetic charge. While this all might sound a little like a flashback to chemistry class, the most important thing to understand is that Nascent Iodine has a huge energy release when consumed. This “charged” state is held by the atom until diluted in water and consumed, whereby it gradually loses energy over a 2-3 hour time span. During this time, Nascent Iodine is recognized by the body as the same iodine that is produced by the thyroid and is absorbed effortlessly by the body.

All the cells in your body contain and make use of iodine. It is concentrated in the glandular system of your body, with your thyroid containing the highest amount compared to any other organ. Significant amounts are also stockpiled in numerous other areas of the body including the salivary glands, cerebrospinal fluid and the brain, gastric mucosa, choroid plexus, breasts, and ovaries.

Some people have noticed additional energy on the first day after taking Nascent Iodine. If you already suffer from an iodine deficiency, you are most likely to notice the effect sooner.

Directions: One drop = 200mcg of iodine. If using for additional energy and general improved health, take up to 6 drops daily. Frequent small doses are more effective than larger amounts at less frequent intervals. It is important to build up your intake gradually in order to experience the least amount of detoxification symptoms. Recommended: Take on an empty stomach before breakfast, lunch and then again before 4pm, as taking it later could raise your energy levels and keep you awake at night.

Disclaimer: Before using, people with existing health conditions and those taking prescription medications should consult with their health practitioner. This product is not intended to diagnose, treat, cure, or prevent any disease. If undesirable symptoms persist, see your health practitioner.

Benefits: Helps to increase energy levels, nourish the thyroid gland and regulate the body’s metabolism. It is a necessary nutrient for overall health and a crucial component of the detoxification process.