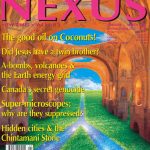 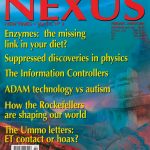 News you may have missed, including protection for vaccine
manufacturers under the US Homeland Security Act, the legalisation of
Prozac for children, and a list of last year’s 10 worst corporations.

CAN GLOBAL WARMING CAUSE AN ICE AGE?
By Dr Robert Gagosian.  It seems counterintuitive, but global warming
could lead to dramatic, abrupt cooling in regions currently warmed by
the Gulf Stream, as has happened throughout Earth’s history

THE MEDICAL ASSAULT ON YOUNG WOMEN
By Sherrill Sellman.  As menstruation becomes increasingly medicalised,
teenage girls are being prescribed the contraceptive pill and
fluorine-based antidepressants to control everything from acne to
irregular periods and depression, despite the risks.

THE BITTERSWEET STORY OF STEVIA
By Jenny Hawke.  The sweet stevia herb has a long history of safe use
in South America and Asia, yet it is illegal as a food or additive in
many Western nations, just when alternatives to refined sugar and
artificial sugar substitutes are desperately needed.

ENIGMA:  A CLOSE CALL FROM DEEP SPACE
By José Chung.  A Black Dwarf star, dubbed “Enigma”, is calculated to
be on a course that will take it within 300,000 km of Earth in March
2003, close enough to cause climatic and geophysical disturbances, but
NASA has been keeping it quiet.

SCIENCE NEWS
By Genesis World Energy.  This consortium of cross-disciplinary
visionaries claims to have developed  special fuel cells for extracting
hydrogen and oxygen from water, and is ready to license the technology.

DARWINISM:  A CRUMBLING THEORY—Part 2/2
By Lloyd Pye.  Analysis of the fossil record suggests that humans could
not have evolved from primates, so the logical conclusion is that we
arrived intact or developed on Earth by extraterrestrial intervention.

SECRETS OF THE LOST ARK
By Laurence Gardner.  Recent findings about the exotic properties of
monatomic gold and platinum group metals are rediscoveries of an
advanced alchemical science known by the priestly hierarchy in the
ancient Middle East and Egypt.

By Steven McFadden.  Guatemalan anthropologist Carlos Barrios,
initiated into ancient Mayan secrets, says that the world, far from
ending in December 2012, will be transformed—but we have much spiritual
work to do ahead of these changes.

Books
“Royal R. Rife – Humanitarian” by Gerald F. Foye
“The Golden Ratio” by Mario Livio
“The Definitive Wee Book on Dowsing” by Hamish Miller
“Perpetual War for Perpetual Peace” by Gore Vidal
“Wild Things They Don’t Tell Us” by Reg Presley
“The Gods Were Astronauts” by Erich von Däniken
“Harnessing the Wheelwork of Nature” edited by Tom Valone
“The Lost Testament:  From Eden to Exile” by David Rohl
“Secrets of the Exodus” by Messod Sabbah and Roger Sabbah
“Universal Water” by West Marrin, PhD
“Moses and Akhenaten” by Ahmed Osman
“In Quest of Lost Worlds” by Count Byron de Prorok
“The Bible Code 2:  The Countdown” by Michael Drosnin
“The Shining Ones” by Christian and Barbara Joy O’Brien