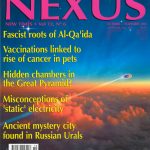 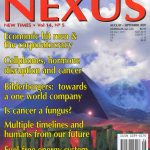 GLOBAL NEWS
We report on mind-reading computers, speculation that the London bombers had British intelligence links, and the mysterious Morgellons disease.

WAS MARTIN BRYANT FRAMED?—Part 2/3
By Carl Wernerhoff.  More than two months after the massacre at Port Arthur, Tasmania, Martin Bryant still knew nothing of the incident, and the transcript of his police interview suggests he was  incapable of comprehending that he’d been set up.

OBESITY:  THE NEW WORLD EPIDEMIC
By David Zeoli.  Obesity is a growing problem in the industrialised world, but controlling it means eating the right kinds of foods that have not been denatured by modern agricultural methods and factory production processes.

ARACHNOIDITIS:  TOXIC CHEMICAL TRAGEDY
By Gil May.  The sufferers of a devastating disease caused by the corrosive action of certain spinal    X-ray imaging dyes are crying out for treatment and compensation, their plight long ignored by drug companies and successive governments.

INDUCED AFTER-DEATH COMMUNICATION
By Michael E. Tymn.  An information-processing technique developed by US clinical psychologist Dr Allan Botkin allows people to overcome grief while communicating with a deceased loved one.

SCIENCE NEWS
Radio and electronics specialist Frank Simonsen discusses the long-delay echo phenomenon, which has been theorised as being caused by ionospheric action or even interference by alien space probes.

TIBETAN BUDDHISM AND THE GREAT GAME
By Shé D’Montford.  Tibet has long been a locus in The Great Game for control of the Indo-Himalayan and Central Asian regions, but have the Tibetan Buddhist leaders been players more than pawns?

BURROWS CAVE:  AFRICAN GOLD IN ILLINOIS?
By Philip Coppens.  A cave that Russell Burrows says he discovered in 1982 allegedly contained inscribed gold artefacts including a golden sarcophagus that may have been transported to Illinois from Africa in the first century AD.

THE TWILIGHT ZONE
Our samplings from “out there” include reports of strange encounters with winged humanoids, land rights for fairies and elves, and the brothers from Brittany who were said to have lived for centuries.

REVIEWS—Books
“Spying on the Bomb” by Jeffrey T. Richelson
“The Weapons Detective” by Rod Barton
“Abominable Snowmen” by Ivan T. Sanderson
“Supernatural California” by Preston Dennett
“The Language of Crop Circles” by J. K. Moore & J. Keijser
“Who Built the Moon?” by Christopher Knight & Alan Butler
“Good Health in the 21st Century” by Dr Carole Hungerford
“When the Impossible Happens” by Stanislav Grof
“A Question of Torture” by Alfred W. McCoy
“Remote Control:  The Battle For Your Mind” by Steve Lynch
“The Light of Civilization” by Nicholas Hagger
“The Torch of Freedom” by D. H. D’Arcy-Evans
“Freedom Next Time” by John Pilger
“Armed Madhouse” by Greg Palast