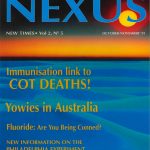 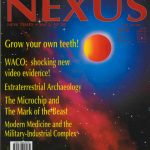 TV – DRUG OF THE NATION
By Susan Bryce. A look at that insidious box in the corner of most of our lounge rooms.

MERCURY AMALGAM FILLINGS – Part 2/2
By Prof. Ron S. Laura and JoHn Ashton. Part 2 of the article that appeared in Volume 2; #8 on the dangers lurking in your mouth.

OXYGEN THERAPIES – HYDROGEN PEROXIDE
An update on how hydrogen peroxide is used in America, on humans plants and animals.

EARTHQUAKES & PREDICTIONS
By Duncan Roads. As time goes on, there seem to be more and more natural disasters. Can these be forseen?

THE PYRAMIDS OF CHINA
By Bruce Cathie. A look at the mysterious and ancient pyramids in China, the largest of which is twice the size of Cheops.

SUSPECT SIDS RESEARCH
Cot Death Research – why do they test on animals if there is no relevance, and why do they ignore independent successes?

ANTI-ALIEN ABDUCTION RESEARCH
By Ron Todd. A research scientist who decides to do something to try and stop aliens abducting himself and his son.

TREASURE OF THE SAN ANDREAS – Part 1/3
By Ted Smith. Part 1 of a fascinating tale of treasure, treachery and history.

THE MAD SCIENTIST’S COOKBOOK
By Peter Nielsen. This issue, how to make your own simple, electro-magnetic radiation detector.

SCIENCE NEWS
Includes an article by Robert Adams on a possible link between earthquakes, ELF waves, and heart problems.

REVIEWS – Books
“Dope, Inc.” by EIR
“Conspiracies, Cover-ups and Crimes”
“The Holy Place” by Henry Lincoln
“The Dead Sea Scrolls Deception”
“The Ptah Tapes – An Act Of Faith”
“Visitors From Within” by L. Royal & K. Priest
“Living Better For Less” by Grass Roots Mag.
“Alchemy Today” by Chris Illert
“MalePractice” by Robert Mendelsohn MD.
“How To Raise A Healthy Child In Spite of Your Doctor”