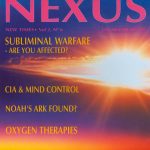 IT’S ALL HAPPENING – NOW!
By Stan Deyo. A fascinating article on geophysical changes that are
potentially on Earth’s horizon. Earthquakes, Sunspot activity, asteroid
collisions and more.

BATTLING THE BANKS
By Charlie Kerr. A remarkable article on how one farmer decided to tackle the banks and the rorts of credit creation.

ESSIAC – A SUPPRESSED CANCER CURE
This is an amazing story of yet another “cure” for cancer – one that
nearly became legally accepted, but was defeated by just three votes.

MIND CONTROL & THE NEW WORLD ORDER – Part 1/2
By Glenn Krawyczk. Part 1 of an astounding piece of research into the use of Mind Control in the New World Order.

GOLD IN THE SAN ANDREAS – Part 2/3
By Ted Smith. Continuing the story of the Spanish conquest of parts of
South America, and the mysterious mountain of gold ingots found in New
Mexico.

SCIENCE NEWS
A round up of interesting news and titbits, from the underground
science network. Subjects this issue include the Life Information
System Ten (LISTEN), and the Lymphaciser.

THE TWILIGHT ZONE
A collection of strange and bizarre stories from around (and off) the
world. Special story in this issue of the massive UFO sighting in
Darwin during the early 1950s.