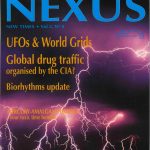 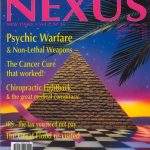 ARI BEN-MENASHE INTERVIEW
Glenn Krawczyk interviews the author of the explosive book “The Profits
of War” and uncovers a web of international conspiracy and intrigue.

MICROWAVES AND YOUR HEALTH
By Prof. Ron Laura and John F. Ashton. They are constantly bombarding
us from the sun, and they sit in many of our kitchens, but how safe are
we in their prescence?

GOLD IN THE SAN ANDREAS – Part 3/3
By Ted Smith. Finishing our story of the Spanish conquest of parts of
South America, and the links to the mountain of gold ingots found in
New Mexico.

UFOs OVER MEXICO
On 11th July 1991, thousands of people in the world’s largest city
witnessed the beginning of a UFO flap that continues to this day.
Edited by Ruth Parnell.

ENERGY & POWER IN THE NEW WORLD ORDER
By Stan Deyo. A look at the monopolisation of energy, free energy research, and thermionic conversion.

NEXUS FOLLOW-UPS
A follow-up section of information that readers of previous issues will
want to know. This issue follows up Ed McCabe, Oxygen Therapies, and
Essiac – the herbal cancer cure.

MIND CONTROL & THE NEW WORLD ORDER – Part 1/2
The second and final part of an article written by Glenn Krawczyk which
explores the many uncomfortable aspects of Mind Control in the New
World Order.

SCIENCE NEWS
A round-up of interesting news and titbits, from the underground science network.