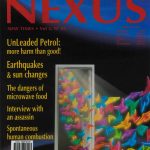 THE GLOBAL OIL CONSPIRACY
By Joe Vials. An inside look at the CIA’s involvement in protecting the
super-rich American British and European oil families over the last
decade.

THE SECRET HISTORY OF BANKS – Part 3/4
By Richard Kelly Hoskins. Continues the series of articles examining the history and effect of banking through the ages.

OXYGEN THERAPIES COVER-UP CONTINUES
Taken from an interview with Basil Wainwright and Sue Ann Taylor. Includes information on the Cebu Clinic in the Philippines.

UFO BASES IN AUSTRALIA
By Rex Gilroy. A fascinating look at stories and experiences that would imply that something strange is going on under our feet!

SEARL’S ANTI-GRAVITY CRAFT
By John Thomas. A summary of the life and inventions of Professor John
Searl, who apparently discovered a method for conquering gravity.

SCIENCE NEWS
A round-up of interesting news and titbits from the underground science
network. This issue features an article on running a car using hydrogen
extracted from water, plus an article by Lakhovsky published in 1925,
on his Radio-Cellulo-Oscillator.

THE TWILIGHT ZONE
A collection of strange and’ bizarre stories from around (and off) the
world. This issue includes some intriguing predictions drawn from the
Eastern Orthodox tradition.