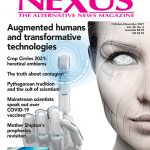 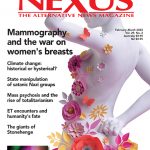 LETTERS TO THE EDITOR
Readers comment on a turning point for humanity, how children should be considered COVID-19 “vaccinated”, and light beings.

Your Body is Crying Out For Dirt
Dr Joseph Mercola highlights the need for earth components in our diet for optimal gut health, and discusses the impact our obsession with sanitation and cleanliness in society has had on human health. We also provide additional information on geophagia.

Bill Gates and the Uncertain Future of Food Security
Dustin Broadbery reveals that far from being the philanthropist he purports to be, Bill Gates is a significant contributor to environmental pollution, deforestation, desertification and poverty, and if left unchecked is potentially a threat to humanity.

Electromagnetic Pulse Weapons
T.J. Coles brings to light the many capabilities of electromagnetic pulse weapons, including where and how they have been used in the past and explains how chaos may ensue without accountability—space weather and the Sun being convenient scapegoats.

Carbon Dioxide: No Big Deal
Ian Phillips breaks down research by David Coe, Walter Fabinski and Gerhard Wiegleb, whose interpretation of climate data shows that claims of carbon dioxide’s ability to influence the planet’s temperature have been grossly exaggerated, and are based on unsound science.

Science News: Structured Atom Model
This issue we present an exploratory model of the nucleus by Edo Kaal, James Sorensen, Andreas Otte and Jan Emming, based on the intuitive notion that the nucleus should have structural properties, and showing a clear causal relation of the outer electrons with the nucleus.

Strange Times: Malefic Entities
Julian Palmer looks at malefic entities experienced not only from induced states of consciousness, but also in daily life, and discusses attacks by these entities, techniques on how to combat them, and the importance for humanity of overcoming these sinister beings.