“Blushield Ultimate Range C1 Cube 5G” has been added to your cart. 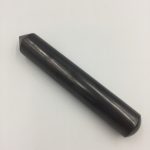 Please note: delivery times subject to stock availability. We import directly from Russia where shungite is found. If  your desired product is out of stock we will reorder but this process can take up to a month or more.

Shungite is a Precambrian rock, a metamorphosed coal, which is a transition phase from anthracite to graphite. Its colour is black.

Shungite as a gift of fortune can help to preserve our health. Its curative properties are striking.

Shungite is unique to Karelia, Russia. It is the only rock in the world that contains fullerenes – a newly discovered form of the existence of carbon in the form of spherical ions. When interacting with water Shungite releases curative complexes of fullerenes into water. These complexes work like Martial waters which assist in the healing of skin diseases, wounds, burns, cure allergies, diabetes, stomatitis, parodontosis, hair loss, cosmetic defects…

The importance of the fullerenes discovery can be proved by the fact that on October 9th, 1996 the Royal Swedish Academy of Sciences decided to award the Nobel Prize in Chemistry to Professor Robert F. Curl Jr., Professor Sir Harold W. Kroto and Professor Richard E. Smalley for the discovery of fullerenes.

Viewing the black shungite products also gives aesthetic pleasure, but this is not the most important property thereof. The most important is the powerful influence on a human body. Nowadays about two million people use shungite filters, medicines and products. Besides, shungite is a “consoling” stone, a stone that takes away negative energy. Its comprehension is just beginning. Many healers in Russia and in the East acknowledge the healing power of shungite. There is an opinion that in lithotherapy only those stones can be used the properties of which have been tested throughout centuries. Shungite is the best example of the fact that not all the stones have been discovered and studied.

Thanks to good luck and the genius of Peter the Great, the first Russian spa (Martial Waters near Petrozavodsk) was opened on a shungite deposit, and for 300 years many generations of Russians have been treated by shungite water, unaware of the fullerenes and fullerites that were discovered only recently. Treatment of many diseases by the waters of this resort, absent of any harmful effects or limitations, affirm that the use of shungite in filters for drinking water and as part of different medicines is absolutely harmless and maximally beneficial. Such a conclusion has been made by researchers and confirmed by the authoritative opinions of the representatives of the Saint Petersburg Military Medical Academy where the curative properties of all the shungite products and medicines have been carefully tested and studied.

The history of Shungite

In recent years, people made gravel of an unattractive-looking ashy-black rock. That was the only industrial use of shungite. Later the specialists began to pay more attention to this unusual rock. After staying under the ground for many hundred million years it has become neither graphite nor diamond. In general the curative properties of shungite have been known for a long time. But as is often the case, everything old is new again.

“For the Lord by His Grace deigned to reveal here such a healing water (that hadn’t been known before) which has not only healed the sick, but also has been useful for Ourselves with Our family and many notable persons, … more than the other waters We used”, – these words are written in the fifth volume of “The Complete Collection of the Laws of the Russian Empire since 1649”.

The secret of origin

Scientists estimate that the age of shungite is about two billion years. Externally the rock resembles coal, but it occurs in the very old layers of crust that formed at the time when there was no life on Earth.

So, how did this strange rock occur?

Well, at that time there were no woods on our planet from which carbon compounds (stones, coal etc.) could occur. And suddenly there are huge deposits of wonderful minerals…

There are several scientific theories that explain the origin of shungite.

First of all, there is an assumption that the shallow bays of the ancient sea were inhabited by some primitive microscopic organisms. Marine deposits saturated with these organic residues served as a basic material for shungite formation.

According to another version a rather exotic shungite is a part of a huge meteorite that brought to Earth a piece of a broken planet Phaeton (a planet where there was once an oxygen life form). The huge piece brought along this form of life, and a shungite deposit occurred at the place where it fell.

Some researchers assert that the shape and structure of shungite bodies have features and characteristics of igneous substances. Maybe the volcanic outburst of a shungite substance into the atmosphere played the same role as a hypothetical piece of Phaeton planet.

Well, be that as it may, there occurred a mineral that has no analogues – both in its healing properties and in the variety of qualities. Shungite heals, saves, purifies, protects, normalises, restores and even grows! (Yes, the famous Karelian black soil at the Tolvuysky farm is nothing else but shungite screes. In rather massive stones the largest potatoes of the North grow).