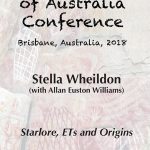 All eight DVDs from the 2018 Secret History of Australia Conference bonus DVD of Welcome to Country
Also available to rent/download, see below for more.

Special Boxed Set
This set includes all eight presentations from the 2018 Secret History of Australia Conference bonus DVD of Welcome to Country in a boxed DVD set.

Bill Gammage
Falsified History I — Landscape management
Author of The Biggest Estate on Earth, Bill Gammage reveals a stunning fact: for over 40,000 years the Aboriginal people of this country had been carefully shaping the land to create a productive and beautiful landscape which the early white settlers most often described as resembling an “English parkland”.

Steven and Evan Strong
Skulls that Rewrite History
A growing number of ancient mystery hominin skulls have been found in Victoria. In one case (Kow Swamp) the skulls were reburied, thus denying any further research. Two years ago, several more, similar skulls were found in another location in Victoria, and are being examined by a team of researchers, who believe the skulls have the potential to rewrite human history.

Stella Wheildon (with Allan Euston Williams)
Starlore, ETs and Origins
Starlore of the Origine (original) people is part of the creation lore (Bootheram). Before patriarchal culture, the southern continent held its ancestral matristic lore since the Alcheringa (the beginning of the Dreamtime) which was several million years and several ice ages ago.

Steven and Evan Strong
Slater and the Standing Stones
Often referred to as the “Aboriginal Stonehenge”, this standing stone formation in northeastern NSW was examined extensively by archaeologists in the early 20th century, only to be covered up and partly demolished in attempts to deflect growing attention. The formation came to light again a few years ago, and fresh attempts to have the stone formation recognised, or at least examined properly, are being hindered by government intervention.

Bruce Pascoe
Falsified History II — Agricultural practices
Using early explorers’ journals and other evidence, Bruce Pascoe — author of Dark Emu —  shows pre­colonial Aboriginal people were not hunter-gatherers, but had a democracy that ensured peace across a continent which was complete with housing, extensively farmed, skilfully managed and deeply loved.

Duncan Roads/Interview with Trent Lynwood
Aboriginal Prophecy and the End of Days
The End of Days is a prophecy that has been long awaited by the Origine people. It is the end of the darkness and a “return” of the spirit of the Dreaming.  This epoch-long prophecy is being spoken of now, because it is expected to happen soon…

Duncan Roads
Challenging Out of Africa
Local and global examples of why we need a rewrite of the history books, including: LIDAR technology which reveals thousands of undiscovered buildings under the sands of Egypt; and vast ancient cities under the jungles of Cambodia and Guatemala; artefacts, bones and art being found challenge “Out of Africa”; pushing occupation back from 65,000 years to 100,000 years ago; and discussion on Kumari Kandam, a semi-mythical sunken landmass that joined Madagascar, India and parts of northwestern Australia.