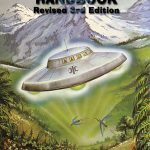 Recapping his earlier books, Farrell moves on to events of the final days of the Giza Death Star and its awesome power. These final events, eventually leading up to the destruction of this giant machine, are dissected one by one, leading us to the eventual abandonment of the Giza Military Complex–an event that hurled civilisation back into the Stone Age.

Chapters include: The Mars-Earth Connection; The Lost “Root Races” and the Moral Reasons for the Flood; The Destruction of Krypton: The Electrodynamic Solar System, Exploding Planets and Ancient Wars; Turning the Stream of the Flood: the Origin of Secret Societies and Esoteric Traditions; The Quest to Recover Ancient Mega-Technology; Non-Equilibrium Paleophysics; Monatomic Paleophysics; Frequencies, Vortices and Mass Particles: the Pyramid Power of Dr Pat Flanagan and Joe Parr; The Topology of the Aether; A Final Physical Effect: “Acoustic” Intensity of Fields; The Pyramid of Crystals and more.