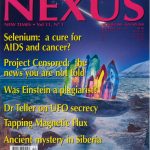 GLOBAL NEWS
Groundbreaking news, including a RICO lawsuit filed over aspartame, massive vote-counting fraud in the US elections, and the Pentagon’s objections to the EU’s Galileo satellite navigation system.

THE ENDANGERED US DOLLAR
By Richard Heinberg. The US dollar may collapse if the OPEC nations decide to sell their oil for euros or if the “mortgage bubble” bursts, causing the US stockmarket to crash in the process.

TRUTH ABOUT VACCINES COVER-UP—Part 1/2
By Russell Blaylock, MD. US health agencies realise that vaccines containing mercury and aluminium have severe neurological effects, but are yet to force manufacturers to remove these toxins.

DEATH BY MEDICINE—Part 3/3
By Carolyn Dean, MD, ND, Martin Feldman, MD, Gary Null, PhD, and Debora Rasio, MD. Unnecessary medical treatments for women and poor care of the elderly are symptomatic of a health-care system in need of an urgent overhaul.

SHORT HISTORY OF THE ROUND TABLE—Part 1/4
By Will Banyan. Cecil Rhodes, Prime Minister of the Cape Colony in the 1890s and founder of De Beers, had dreams of establishing an elite secret society and creating a unified British Empire.

THE WANDS OF HORUS
By Dr Valery Uvarov with Carl Agar. The ancient Egyptian pharaohs and priests held copper and zinc cylinders filled with crystals or minerals to tune into the power of the pyramid and facilitate their communication with the cosmos.

SIBERIA’S “VALLEY OF DEATH”—Part 2/4
By Dr Valery Uvarov. Eyewitness accounts of the 1908 Tunguska explosion reveal the existence of an ancient high-tech installation in remote Siberia that sent huge plasma spheres to destroy a meteorite in flight, preventing a major catastrophe.

THE TWILIGHT ZONE
Strange tales from on and off our world. This issue we feature Debbie Payne’s exposé of files available in the Australian National Archives that confirm government knowledge of the UFO phenomenon.

REVIEWS—Books
“Censored 2005” by Peter Phillips & Project Censored
“The Seventh Sense” by Lyn Buchanan
“The Encyclopedia of Medical Breakthroughs…” by MRA Assoc.
“The Fourfold Path to Healing” by Thomas S. Cowan, MD
“Why Aren’t I Learning?” by Rafaele Joudry
“Crossing the Rubicon” by Michael C. Ruppert
“The Canopus Revelation” by Philip Coppens
“Matrix of Creation” by Richard Heath
“Lemuria and Atlantis” by Shirley Andrews
“Chemtrails Confirmed” by William Thomas
“Suns of God” by Acharya S
“Shopped” by Joanna Blythman
“Not on the Label” by Felicity Lawrence
“Hoodwinked” by Uri Dowbenko