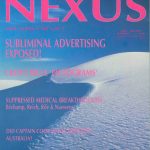 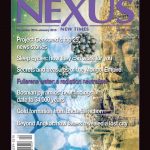 TV – DRUG OF THE NATION

By Susan Bryce. A look at that insidious box in the corner of most of our lounge rooms.

By Prof. Ron S. Laura and JoHn Ashton. Part 2 of the article that appeared in Volume 2; #8 on the dangers lurking in your mouth.

An update on how hydrogen peroxide is used in America, on humans plants and animals.

By Duncan Roads. As time goes on, there seem to be more and more natural disasters. Can these be forseen?

THE PYRAMIDS OF CHINA

By Bruce Cathie. A look at the mysterious and ancient pyramids in China, the largest of which is twice the size of Cheops.

Cot Death Research – why do they test on animals if there is no relevance, and why do they ignore independent successes?

By Ron Todd. A research scientist who decides to do something to try and stop aliens abducting himself and his son.

TREASURE OF THE SAN ANDREAS – Part 1/3

By Ted Smith. Part 1 of a fascinating tale of treasure, treachery and history.

By Peter Nielsen. This issue, how to make your own simple, electro-magnetic radiation detector.

Includes an article by Robert Adams on a possible link between earthquakes, ELF waves, and heart problems.

“The Holy Place” by Henry Lincoln

“The Ptah Tapes – An Act Of Faith”

“Visitors From Within” by L. Royal & K. Priest

“How To Raise A Healthy Child In Spite of Your Doctor”

“The Cosmic Conspiracy” – by Stan Deyo

“Channelling – Voices From Beyond”