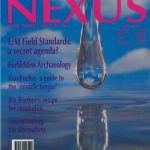 Follow-up on several articles that have captured ongoing interest with readers. Topics include a translation of those mysterious Egyptian hieroglyphs found in the Hunter Valley, NSW

THE MICROCHIP & THE MARK OF THE BEAST

With Dr Carl W. Sanders. This is indeed a fascinating extract from an audiotape from one of the designers of the now-famous microchip, explaining its intended use in a new world order.

From Samuel L. Blumenfeld. Two videos have been released, both with on-site footage, showing who the ‘good guys” and who the ‘bad guys’ really were. This is a comprehensive review of the first.

THE SECRETS OF DENTAL HEALTH

With Dr Robert O. Nara. Many years ago, Dr Nara embarked upon a campaign to educate people into preventive dentistry. His efforts cost the dental industry lost revenue, and resulted in his own loss of licence.

Dr Alan S. Levin is interviewed on a wide range of subjects surrounding the involvement of the military in modern medicine.

By David Hatcher Childress. This article, extracted from his latest book, Extraterrestrial Archaeology, focusses on the mysteries of Mars and its moons, and the Russian probes sent to photograph them.

By Joe Vialls. Continues the amazing tale of political manipulation, mind control and the intelligence community. Based on a true story!

By Alison David. The intriguing story of Dennis Lee, inventor and future thinker, who came up with a Super Heat Pump, and other innovations, that he claimed could provide free electricity.

Contains the second part of Toby Grotz’s ’round the world’ round-up of free energy researchers and their work, plus some other titbits of interest.

A collection of strange and bizarre stories from around (and off) the world. Topics this issue include sightings of monsters in the Yukon, and more on the “Lost Land of the Lizard People”.

“Why Flying Endangers Your Health” by Farrol S. Kahn

“Space Aliens From The Pentagon” by William R. Lyne

“A Century Of War” by F. William Engdahl

“Project Seek” by Gerald A. Carroll

“The Thirteenth Stone” by Reginald Lewis

“Trail Of The Octopus” by Donald Goddard with Lester K. Coleman

“The CanCell Controversy” by Louise B. Trull

“The Physics of Natural Health, Agriculture and Healing”

“Playing In The Rainbow” by Tarshito