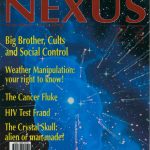 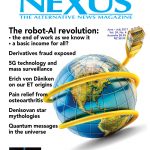 By Susan Bryce. A top-secret ‘intelligence-sharing’ pact, linking the USA with Australia, Canada, New Zealand, the UK, etc., has serious implications for national sovereignty and democracy.

THE LIES OF UNLEADED PETROL-Part 3/3

Compiled by Catherine Simons. This concludes our expose of ULP technology and the health risks associated with petroleum constituents and catalytic converters.

By Ian E. Stephens. The continued use of toxic fluoride compounds in some drinking water and drugs amounts to a contemptuous disregard for the general public’s physical and mental health.

By Rex Gilroy. Scattered across Australia are the stone monuments and glyphs of an ancient megalithic culture, older than any in Europe or Asia and of non-Aboriginal origin. Pre-history as we know it is due for a major shake-up.

By Oliver Nichelson. Circumstantial evidence suggests that Nikola Tesla’s wireless power transmitter could have triggered the devastating explosion over Tunguska, Siberia, in 1908.

THE PERILS OF PASTEURISED MILK

A selection of interesting news and views from the underground science network. This issue, Adams supermagnets, and evidence that dowsing works.

A collection of strange stories from around (and off) the world. Here, more Great Pyramid channelling, plus a UFO/ET encounter at a US military base.

“Unbroken Promises” by Vance A. Davis with Brian Blashaw

“Sacred Geography of the Ancient Greeks!’ by jean Richer

“Disneyland of the Gods” by John A. Keel

“How to Build a Chemical-Free House” by Janet Forster

“UFOs: A Manual for the Millennium” by Phil Cousineau

“The Big White Lie” by Michael Levine with Laura Kavanau-Levine

”Media, Mania and the Markets” by J. Campbell and W. Bonner

“The New Book of Food Combining” by Jan Dries

“OPC in Practice” by Bert Schwitters with Prof. Jack Masquelier

“At the Gates of the Citadel” by Peter Bros

“OPC in Practice” by Bert Schwitters with Prof. Jack Masquelier

“Saved By The Light” by Dannion Brinkley with Paul Perry

“The Abduction Experience” by Tony Lynn

”Under The Pyramid” by James Stewart

“Songs of the Andes” by Antonio Pantoja