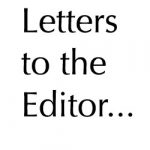 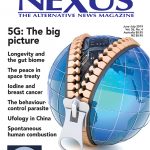 Iodine for the Prevention and Treatment of Breast Cancer

Letters to the Editor
Readers comment on redshift theory advances, SpaceX and NASA’s empty promises, Apollo politics and the Ropen.

5G: The Big Picture
A comprehensive exploration into humanity’s current crossroads by Jeremy Naydler, PhD. The final assault of choosing 5G technology will result in not just physical harm to all living beings, but human disassociation from the natural world.

Toxoplasma Gondii: A behaviour-changing parasite
This parasite has the ability to change the behaviour of its host in a very spectacular way. Professor Robert Sapolsky examines the process by which this occurs and contemplates how this information may be used in future medical developments—even warfare.

The Longevity Microbiome
By Greg Fredericks, ND, MA. As research increasingly confirms the connection between gut health and wellness, it is now also becoming apparent that a long, healthy life is linked to genes in the human gut microbiota, with diet a crucial part of the mix.

Science News: Antigravity Mystery
Ning Li, the scientist who was lauded for producing a gravity-like field some 20 years ago has not been heard of since, with some suggesting she has disappeared into the Black Budget projects of either the US or China.

Peace in Space Treaty
Dr Carol Rosin introduces the updated Treaty on the Prevention of the Placement of Weapons in Outer Space, discussing the role of Wernher von Braun in its foundation. Dr Alexander E. Semyonov elaborates on the astro-geopolitical importance of the Treaty and the desire for power versus peace in space.

Spontaneous Human Combustion
Louis Proud investigates the various theories surrounding the phenomenon known as spontaneous human combustion, including the impact of negative, suicidal thoughts, the link with poltergeists and ball lightning and the role of the body’s electrical system.

Strange Times: Chinese Ufology
An overview of Chinese ufology covering current organisations and institutions and their hierarchy systems, trends in Chinese ufology, and government attitudes from censorship to jail sentences.