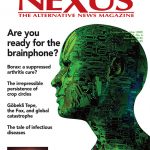 The Story of Infectious Diseases

LETTERS TO THE EDITOR
Readers comment on police states in Australia, QAnon confusions, Egregores and US politics, Kali Yuga revelations, Einstein’s relativity hoax and the uncertainty of reality.

GLOBAL NEWS
We report on regulation of Facebook and Google, a polymer to merge brain with AI, microplastics found in all human organs, 5G and alternative reality, 6G developments, world population decline, the mystery of influenza, bogus COVID-19 statistics, Australian Indigenous culture dated at 120,000 years, and more.
Elon Musk’s Brainphone: Will Humans Be Rendered Unrecognisable?
Although Elon Musk’s “brainphone” is set to possess advanced capabilities, Scott Snair, PhD warns of its potential for control, its impact on the human brain, social and cultural repercussions, the effect on human appearance, how fear will be used in its marketing, and consequences for independent free thought.
Borax: A Suppressed Arthritis Cure?
Githa Ben-David looks at the history behind the banning of borax and the role of boron in the body, from supporting absorption and delivery of calcium into bone tissue to hormone health, soil deficiency and far-reaching health successes, particularly in arthritis.
The Story of Infectious Diseases
Dr Patrick Quanten explains how medical science conceived the harmful “virus” by copying the theory that bacteria causes infections, and by jumping to conclusions and conveniently removing itself from any scientific burden required to prove causation.
Crop Circles 2020: Irrepressible Persistence
Andy Thomas brings us 2020’s crop circle roundup, observing that although England had pandemic restrictions in place, more circles appeared than last year, with some incorporating references to current events, piquing the interest of a younger generation.
SCIENCE NEWS: Electricity and Life
This issue we publish an excerpt from Arthur Firstenberg’s book, The Invisible Rainbow, which illustrates the history of electricity and life, making a compelling case that many environmental problems, as well as the major diseases of industrialised civilisation are related to electrical pollution.
Göbekli Tepe, the Fox and Global Catastrophe
Adrian Ellis takes us to Göbekli Tepe’s Vulture Stone, the Great Sphinx of Giza, through physics and up to the stars to illustrate how the ancients were aware of Earth’s cycle of catastrophe every 12,900 years, and that according to these signs, a catastrophe is imminent.
STRANGE TIMES: Who is on the Moon?
Linda Moulton Howe shares information communicated by a Pentagon insider regarding communication towers placed on the Moon during the Apollo missions, in line with whistleblower William Mills Tompkins’ assertion that the Moon is a command centre for alien intelligences.
REVIEWS
BOOKS
THE INVISIBLE RAINBOW by Arthur Firstenberg
MONSTERS OF THE DEEP by Nick Redfern
PROPAGANDA, LIES AND FALSE FLAGS by Robert Fantina
REMOTE HEALING by Maria Sagi, PhD
THE REBEL ANGELS AMONG US by Timothy Wyllie
SACRED ENERGIES OF THE SUN AND MOON by Erika Buenaflor, MA, JD
PLAGUE OF CORRUPTION by Dr Judy Mikovits and Kent Heckenlively, JD
CULTIVATING YOUR MICROBIOME by Bridgette Shea, LAc, MAcOM
FILM REVIEWS
STAR STORIES OF THE DREAMING Directed by Eleanor Gilbert
1986: THE ACT Directed by Andy J. Wakefield
MUSIC REVIEWS
TOUKI—A JOURNEY by Modou Touré
BETWEEN LAND AND SEA by JC and The Tree
SELF MADE MAN by Larkin Poe
ROUGH & ROWDY WAYS by Bob Dylan