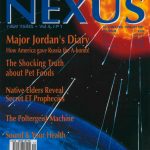 By Callum Coats. An astute observer of Nature’s creative processes, Viktor Schauberger developed ideas and inventions which, though suppressed in his time, have great potential for reversing our environmental and energy crises.

COVERT OPERATIONS OF THE US NSA

By John S. Akwei. A lawsuit filed against tIle US National Security Agency documents a network of ultra-hi-tech mind-control and surveillance systems being used against an unwitting public.

THE PROPHETIC VISIONS OF MITAR TARABICH

By Tim Hobbs. A little-known Serbian prophet had an uncannily accurate track-record in predicting world events. His visions that are yet to be fulfilled may give some cause for concern about the future.

By David G. Guyatt. The collapse of England’s oldest bank in February 1995 was immediately blamed on ‘lone trader’ Nick Leeson, but behind-the-scenes analysis suggests a massive conspiracy among the upper echelons of the banking fraternity.

By Christopher Bird. Noxious Earth-ray emissions have been implicated in many illnesses including cancer. Despite what the sceptics believe, these invisible killers can be scientifically identified, and their effects avoided by taking simple precautions.

By Viera Scheibner; Ph.D. Vaccines are known to be contaminated by micro-organisms, but several single-celled invaders are now considered responsible for such serious diseases as to warrant a complete rewrite of immunisation policies.

A selection of interesting news and views from the underground science network. In this issue, we feature Marko Rodin’s “magic circle” coil windings.

By Richard Boylan, Ph.D. Governments may soon announce the truth about UFOs and extraterrestrial visitations to our planet, but how will they explain away 50 many years of disinformation and denial?

A collection of strange stories from around (and off) the world. In this issue, “Star Wars” over Australia.

“Psychic Dictatorship in the USA” by Alex Constantine

“Outposts: A Catalog of Rare & Disturbing Information” by Russ Kick

“UFO Retrievals: The Recovery of Alien Spacecraft” by J. Randles

“Proceedings of the 1st World Congress on Cancer”

‘What’s In Your Cosmetics?” by Aubrey Hampton

“At Peace In The Light” by Dannion Brinkley

“Into a Timeless Realm” by Michael J. Roads

by Gabrielle Roth and the Mirrors

“Of Tibet” by Terry Oldfield

“After the Rain” by Esther “Little Dove” John