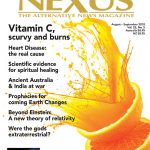 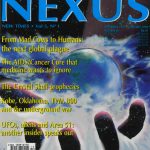 By David G. Guyatt. Thousands of Gulf War veterans and their families are suffering and dying from this mysterious syndrome. Are they guinea pigs in a sinister biological warfare program?

A BITTER PILL TO SWALLOW Part 2/2

By Sherrill Sellman. Now that medical studies are increasingly demonstrating the Pill’s serious, lifethreatening side-effects, women must decide whether the costs of taking it are too high.

Compiled from Howard Lotsof’s ibogaine web site. An extract from an African medicinal plant, ibogaine can rapidly overcome drug and alcohol addiction. It should be made widely available.

By Harry Mason. Which world power groups are responsible for the fiery demonstrations of Tesla-style EM weapons observed in the Australian outback in recent years? And what was the Japanese Aum sect’s agenda in the broad scheme of things?

A selection of interesting news and views from the underground science network. In this issue we publish a paper by Bill Fogal on the secrets of his innovative Charged Barrier technology.

By Alan F. Alford. The evolution vs creation debate is complicated by another theory on Homo sapiens’ origins, that “the gods” were real beings who genetically engineered us “in their own image”.

“The Physics of a Flying Saucer…” by Ted Roach

“Out of Body Experiences” by Robert Peterson

“Ark of the Covenant” by Jonathan Gray

“The Bible Code” by Michael Drosnin

“The Wisdom of the Body” by Sherwin B. Nuland

“The Return of the Serpents of Wisdom” by Mark Amaru Pinkham

“UFOs: The Contacts/Part 1: The Pioneers of Space”

“Mystery Fireballs of the Australian Outback” with Harry Mason

“The Edwards Air Force Base Encounter: The USAF vs UFOs”

“In the Key of Healing” by Steve Halpern